Diablo Immortal: Sanctuary is in Peril

The long-awaited draughting crawler and first mobile game in the Diablo franchise is finally here. Diablo Immortal is a third-person hack ‘n’ slash role-playing video game closely resembling its console ancestors. Diablo games are highly anticipated and beloved, but does Diablo Immortal live up to the hype?

Diablo Immortal occurs between the events of Diablo II Lord of Destruction and Diablo III. In Lord of Destruction, the demon Baal came close to enslaving humanity by corrupting the Worldstone. However, he was thwarted, and the Worldstone was broken into shards still tainted by Baal s corruption. Now, people are forbidden to use the herald of Diablo, Skarn, for determining the fragments and getting his master back. The story is an intriguing one in its own right, featuring essential aspects that correspond with the Diablo franchise s most iconic characteristics. However, if you are looking for a game with a stunning, innovative storyline, you should look elsewhere.

Players begin their adventure in the town of Wortham, which is affected by the control of evil cultists and the Dead. As you progress through the different areas adjacent to Wortham, you may find sights that captivate and instill awe in you. The game’s setting, which is rich in awe-inspiring views, pays homage to the fantasy worlds of games before it.

Wizards, and Crusaders, and Necromancers, Oh My

The game is rich in fluid controls and provides a good combat system, while compelling you to play. You can opt to play in the shoes of either a Barbarian, Wizard, Demon Hunter, Monk, Crusader, or Necromancer, each with its own unique combat abilities. For example, Necromancers may utilize the Corpse Explosion ability, which would cause damage on all enemies within range, while Crusaders possess the Shield Glare ability, which would blind enemies while inflicting damage.

Each class has varying advantages and disadvantages, so gamers are likely to find one that is in line with their style. The Demon Hunter class, for example, deals a great deal of damage but isn’t very resistant.

Diablo Immortal might have offered some great graphics, but the fighting system and game’s paywall both grow to be even costlier as you progress. Multiple pay-to-win elements with outrageous pricing make it a dungeon crawler that’s more about the devs taking your money than your own avatar raiding dungeons.

Eternal orbs, the game’s premium currency, can cost anywhere from 0.99 cents for 60 orbs to $99.99 for 6,000. The game also offers subscriptions at $8.99 a month, which provide players with daily rewards. However, you will lose your rewards if you fail to log in and claim them. Diablo Immortal’s Google Play page is currently flooded with negative reviews about the game’s pay-to-win setup.

Gamers may continue to play the title without investing any money, but many of the title’s microtransactions will probably need to be grinded. 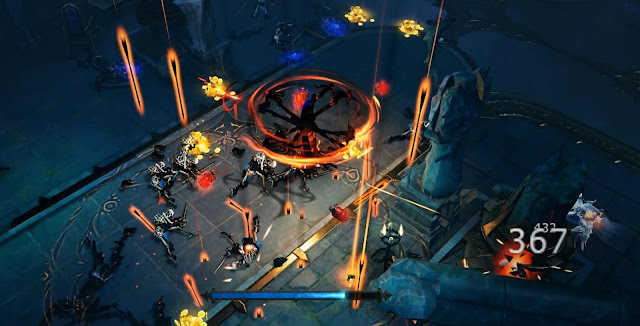 Another problem this title suffers from is the number of bugs. Some players have trouble creating their character without the game crashing, while others are experiencing lag. Deity Immortal should have provided a non-online option for players who don’t have enough web accessibility or only want to play alone. This would have helped to reduce lag within the activity.

Diablo Immortal aims to deliver an engaging fight and a great scenery. However, the rough cryptocurrency transactions and the slow decrease in the level’s progress interfere with what would otherwise be a decent game. Likewise, the absence of an offline option drags it completely away, considering it’s generally very difficult to get rid of lag. Diablo Immortal is worth checking out if you’re looking for a way to pass the time and don’t mind the tedious advertisements for microtransactions and problematic server connections in the game. But, if you want a unique and engaging mobile dungeon crawler, this isn’t that.

Diablo Immortal is an action role-playing game for mobile that was released on September 25th, 2018. The game follows the story of Diablo, a Demon Hunter who is resurrected after being killed in the first game. In Diablo Immortal, players can choose from multiple classes and explore the world while fighting against enemies in real time. Overall, the game received mixed reviews from critics who praised its graphics but criticized its gameplay mechanics.