Rocket League has conquered the Free-to-Play genre and remained a viable Esports for over five years. Providing a truly one-of-a-kind experience that’s easy to get into but hard to master, it is an indispensable staple in the annals of video games. A developer that puts the player community first, Rocket League has become a longstanding leader in video game history. Given Rocket League ‘s acclaim, a mobile version of it was inevitable. But the question at hand was, What would a downsized version of this game resemble? Could the high-flying acrobatics and thrills of the original be ported to a handheld device? Luckily, the Rocket League Sideswipe port almost looks like Psyonix caught lightning in a bottle all over again.

The transition to mobile has its limitations. Sideswipe avoids the 3D perspective for 2D. Some critics may even see this as sacrilege by improving the 2D perspective for quick mobile-friendly gaming. Sideswipe retains flight sequences. But it does not compromise their powerful thrill. The game’s environment is more contained, allowing players to observe everything at once. This makes it possible to see what’s occurring, not only in the immediate area in front of the ball and the opponent, but also in other parts of the arena. Getting around still takes some time, though.

Gameplay is currently limited to three modes: 1v1, 2v2, and 2v2 Hoops. The first two modes feature the traditional Rocket League experience, where players take on the role of a ball with explosive RC autos in order to play soccer or basketball. 2v2 Hoops provides exactly the same idea, but with basketball rather than soccer. Sideswipe has a practice mode for rookies to practice their abilities in a low-stakes match with the cpu. This mode is fully developed and has enough variation between the modes for extended play sessions. This is also true when trying to finish goals on Rocket Pass. 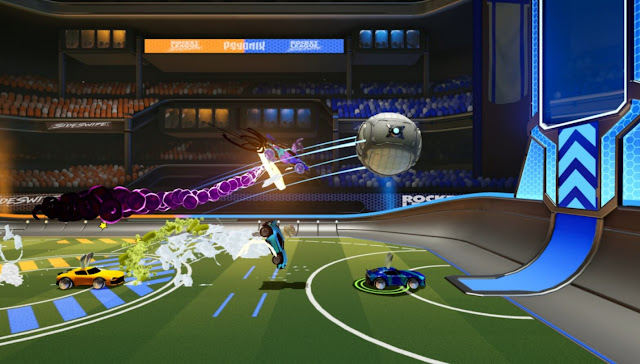 Of course, Free-to-Play doesn’t quite guarantee that there will be no Pay-to-Win gaps. However, since this is a Free-to-Play game, sideswipe.com will never implement a Rocket Pass, and players should complete a Daily, Weekly, or Seasonal HUD as a reward for playing the game. Unlocks are purely cosmetic and can be earned by simply playing the game and completing challenges. Should players feel the need, they can pay for unlocks using real-world money as well. The implementation is well-developed as challenges are easy to accomplish, allowing players to frequently receive rewards. The array of customizable options and supplies already available today gives players lots of things to show off.

Sideswipe provides a smooth bridge between desktop and mobile platforms. The game uses a streamlined focus that preserves a sense of the original while giving certain elements substantial upgrades. Sideswipe, much like Wild Rift, continues to tweak its formula just enough to maintain the experience familiar yet engaging. It won’t ever supplant the original. But this isn’t the intent here. Instead, it allows new fans to try the series for the first time. Perhaps the very best thing is that it permits a scratch player base to give the pace a try.

When you first start playing Rocket League, you might be overwhelmed with all of the choices you have to make. Do you go for the ball? Try to take out the other players? What about the different power-ups that are scattered around the field?
Rocket League is a game that is very hard to describe. It is soccer, but with cars. It may not seem like the most exciting game, but it is extremely addicting and fun. The object of the game is to score goals against your opponent. You can play against people online or against bots. The bots are not very smart, so playing against people online is the best way to play. There are a few different modes that you can play in, but my favorite is 1v1.