Stick to the Shadows

The Cyberpunk aesthetic has been gaining popularity since 1980 with the genre of Blade Runner. The word was coined in 1980 by author Bruce Bethke in his short story by the same name. In 1984, the term became popular with the release of William Gibson’s novel Neuromancer. Today, the Cyberpunk aesthetic is positively thriving throughout virtually all media. Of course, this includes the area of Other Cyberpunk Games.

Developed by DreamPlay Games Site, Unearthed Shadow ARPG is a video game with a particular affinity for science-fiction and cyberpunk. Combining the imagery and gameplay of Metroid and Strider, the developers aim to evoke both titles while reaching a new place in their own imagination.

From a gameplay perspective, Undestroyed is somewhat similar to the Strider series, relying on fast side-scrolling, button mashing, and upgrade options in the game. Thankfully, it has a pause feature, which is featured a lot in faster-paced games. It includes detailed accurate and Metroid-style maps, which can be handy when navigating the stages because they start to expand and become increasingly maze-like.

Most weapons are close-quarters, and their strength originates in their reach and assault. Unfortunately, many weapons (like the long-spear that pierces through walls) are objectively better than others, and due to their random manufacture once you play the game, it might arbitrarily create a completely different experience.

Enemies are slightly smaller but still offer significant damage. Environmental dangers such as tornadoes and floods can take you out of the game much more quickly. This is generally how the game generates its difficulty. There’s no single enemy, but hundreds of high-level opponents that defeat you slowly over the course of connected stages, and a disease bar reducing your health slowly can kill you much quicker than you think. Your boss is visually interesting, but rarely a challenge. Most of them have a vulnerable weak spot that will take only a brief moment of your time to discover. 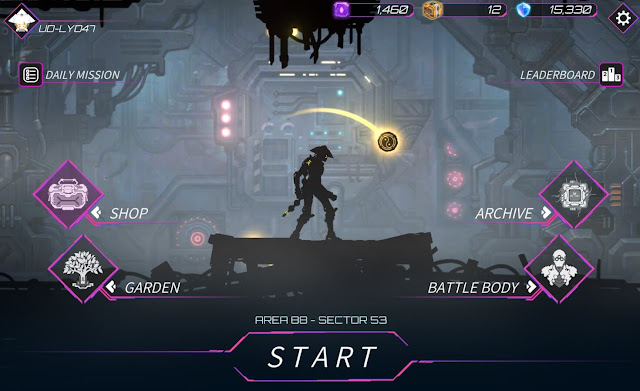 Undestroyed combines the cyberpunk aura with neo-noir themes. In an effort to inundate the Shadow component of its name, Undestroyed shrouds all of its game’s characters in darkness. Most faces in the game are pitch black as distinct from neon lights, weapons, and other circuity pieces. While it is fascinating at first, it does wear on you after some time when you see what you initially considered a interesting style turned into an absence of things to see.

Stages are pleasing to the eye and the backgrounds are one of the top attractions of the game. More than anything else, they remind you of Neo-Tokyo from the 1988 release of Akira. The soundtrack is an essential aspect to consider if you’re designing electronic dance music. You won’t be able to preserve this element adequately if bare-bones music loops are your design choice.

With all that said, UnovaShock is an interesting example of a game having good raw ingredients but falling short to the point of being only the sum of its parts. Worse, while the game might be excused as an admirable failure in this respect, its many failures make it sore to look upon.

Another example of this is the poor explanation of Undestroyed. This unfortunately includes the absence of story elements, which means there are no controls to learn. There are plenty of in-game options, though the setup of all the in-game currencies, base upgrades, and other choices is entirely due to random chance.

The use of advertisements here is especially questionable. Upgrading takes part with watching an advertisement for one minute. Ads also make up the structure of the game because its launch and gathering resources.

Last but not least, the Undamaged difficulty is a difficult mess. Ranging from painfully easy difficulties to matters a lot like a quarter-guzzling arcade machine, it leaves you feeling either frustrated or unfulfilled. This is largely due to the peculiar, almost schizophrenic way in which the game introduces mechanics and then invalidates them. As an example, home or plastic center is liked a lot and can be fun to run through. Then that fun is ruined by the addition of teleporting as a system, which restricts you to wonder from one room to the next. Why then is a home base? Make rooms selectable tabs in an interface or create a functioning hub level.

Undestroyed: Shadow ARPG is Mixed bag it will be better or worse depending on what you are looking for. If the tax office is your destination and you happen to take a free and flashy button masher with you, this will effectively entertain you. You’d be entertained even more if you are a fan of mid-2000s flash games and robots. If you were hoping to have an encounter that would offer you with practical experience, then playing Undestroyed is believed to provide the most amount of authenticity.